Inside the Rising Son Story

In 2795, the citizens of Earth stand at the edge of a hopeful crossroad. For the first time in centuries, humanity appears to be entering a new golden age of peace, progress and technological rebirth. But the new Renaissance comes at a tremendous cost; it took a lingering period of global strife, seas of spilled blood and acts of senseless decimation to wedge the splintered race together.

Two hundred years prior, history’s deadliest war came to a crashing halt after hydrogen mining operations prematurely forced the sun into its final state. The world’s five major powers disarmed and bonded in a unified attempt to forge a superstructure that would allow future generations to eventually leave Earth and survive the wrath of the growing star.

A young man named Vikaré Raymond, scarred at birth by a life-saving titanium shunt inserted deep in his brain, uses his intelligence to support the superstructure project. Struggling with a damaged limbic system that strips him of emotions, Vikaré takes solace in throwing himself into his analytical work. Despite a strained relationship with his parents and aunt, who are members of a terroristic underground cult hell-bent on delivering humanity to the sun as payment for their ancestors’ sins, Vikaré manages to find a sort of mundane tranquility in his stark surroundings.

When an extraterrestrial vessel unexpectedly lands in the Panama Canal to investigate the celestial turbulence two centuries prior, he learns that the shrapnel wedged deep in his brain is the key to deciphering the adaptive encryption of the beings’ language. As the only human capable of interpreting their vocalizations, Vikaré feels the weight of mankind’s future bearing down on his already damaged mind.

The turn of events forces him to make a life-altering choice: either rise to his place as his parents’ son, or eschew his blood-bound duties to fight the growing threat from the dying sun. Adding further fuel to the chaos, Vikaré must also counter the deadly whims of the pervasive shadow cult, whose leaders interpret the recent chain of events as the imminent prophetic arrival of their new leader: a maniacal celestial goddess who will soon be reborn in a nearly unstoppable digital form.

Vikaré’s decisions trap the entire Raymond clan in a global web of twisting motivations, shifting alliances, revelations of long-held grudges and bold power plays to survive and thrive in their toxic, doomed world.

Will Vikaré abandon his parents–and the shadowy enviro-terrorism organization they support–to beseech the aliens to help spare humanity? Can the residents of Earth rally long enough to finish the superstructure? Which is ultimately more powerful: destruction, or conservation?

Combining family drama and a tale of introspective self-discovery with neurological, linguistic, religious and space themes, Rising Son is a complex fictional story that weaves many journeys and paths together to create an engrossing tale. Its edgy, gritty perspective and occasionally mature subject matter appeals to adult and very late-teen readers alike. The story is inspired by epic fantasies and space operas but forgoes conventional plot devices, creating a fresh and unexpected read that requires readers to think about their own place in the wide, dark universe. 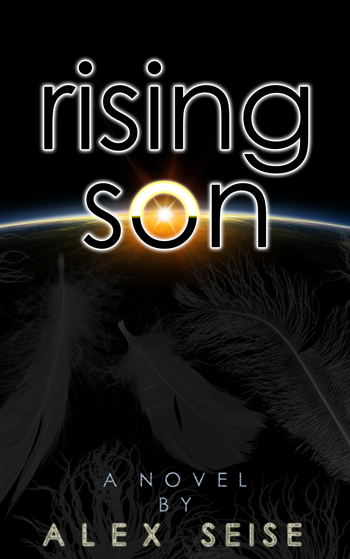